A long time ago, I realised that a Sunday morning pancake breakfast did something bad to my blood sugar. Pancakes with maple syrup and a big glass of orange juice would lead to a terrible meltdown later in the day. As a result, I rarely eat pancakes even though they’re a popular weekend treat in my household.

Last week, getting ready for a Clean & Green January, I bought some coconut flour (and assorted other new foods). I tried this recipe the last two mornings. Afterwards, both today and yesterday, I have felt really satisfied and distinctly not hungry. That is a nice feeling, considering hypoglycemic episodes are really awful and have plagued me for as long as I can remember. And when I eat a high-carb meal (or snack), I’ve noticed that my body does not send my brain the “off” signal. Instead, foods like pizza or cookies say “More, please” or “More, NOW!” So when I eat a meal that leaves me feeling satisfied for the rest of the day, I pay attention.

Now, about coconut flour. I’m not in love with it yet. But it has potential.

Method:
Mix these ingredients and let them sit for five minutes. Oil or grease up your pan and heat over medium heat. Pour about a 1/4 cup of batter for each crepe, allowing each side to brown before flipping it.

Without accounting for toppings or cooking fat, FitDay says the whole batch amounts to:

I found the cakes a little dry and remembered too late not to be phobic about fat. I could have spread some grass-fed butter on them to improve the taste a little. I used more than a pinch of cinnamon – more like a teaspoon.

I also fed some to my 12 yo son and his (vegetarian) friend. The son said, nah. The friend said, yah! (I note the V status of the friend so you can judge his palette.) The real test will be whether my coconut-despising husband will try a bite. I like coconut, and to me, these did not taste like coconut.

After the big glob technique did not spread in the pan like wheat pancake batter, I tried pouring a thin layer instead of a big glob. Feh. The cake still resisted cooking evenly. Not the look I was going for. 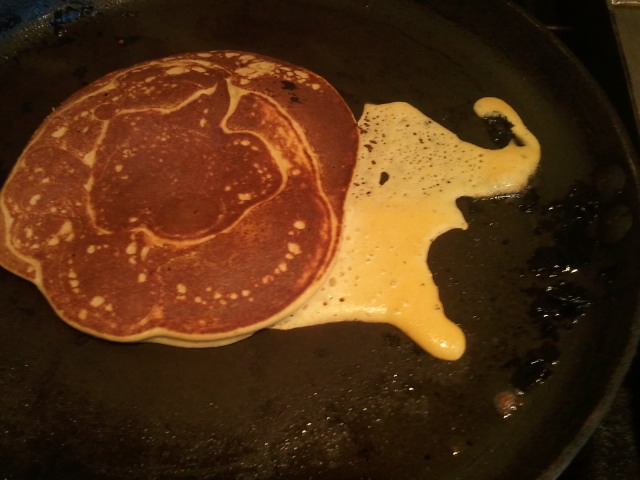 Make it better: Yesterday, I sauteed a diced apple with bacon to go with the pancakes. Yum. Today, I microwaved some fresh blueberries with a big squeeze of fresh lemon juice. Yum.

Even though these weren’t the most delicious breakfast eats, I was very happy to feel full and satisfied for about six hours afterwards.