Assemble in measuring cup for proportions. Transfer to blender. Wake up the neighbors with extended whirring sound. Add some water if the mixture is too thick. Total preparation time: About two minutes.

I’ve modified a recipe from the Wahl’s Paleo Protocol (because I do want I want). The original recipe didn’t call for the banana (or ginger or lemon juice). I wanted to make it a little sweeter because I was intimidated by the amount of greens. And the banana was sitting on the counter, waiting for some action.

If you like cold drinks, keep your coconut milk cans in the refrigerator. You can also use frozen berries for a frozen smoothie.

The smoothie tastes very good. I think the lemon juice brings out the sweetness of the berries. Cinnamon can act as a blood thinner. So be careful how much you eat every day, especially if you are taking medication.

I am looking for ways to add greens to my meals and to rock out of my food rut. Instead of saying “I should” to myself, I ask my brain, “how could we do this….” Solutions, rather than shoulds.

This morning I loathed the idea of fried eggs. Instead, I spied some fresh baby chard and thought, why not for breakfast?

I paired soft-boiled eggs with the Swiss chard, which I sautéed lightly in bacon drippings.

I started the eggs before the greens. They were done at the same time. A twist of pepper and a dollop of balsamic vinegar creme and voilà! Very satisfying. 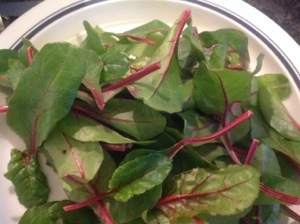 Posted in Uncategorized and tagged greens. Bookmark the permalink.

*even my husband likes these.

these tasty little bites can be made while you are roasting something else. they take less than 20 minutes to roast, so you can time them to be done with the rest of the meal.

instructions
preheat oven to hot (225c or 450f) and move one of the racks to the bottom.
slice sprouts in half (north to south), removing any yucky outside leaves. slice off the base if it’s hard and discolored.
in a bowl, mix oil and salt
add the sprouts and stir, covering them with the oil
place the sprouts flat side down in a single layer on a tray or jelly roll pan
cover the pan with a sheet of tin foil
put the pan on the bottom rack
roast for about 8 minutes, 10 if the sprouts are larger
remove the tin foil and continue roasting for another 8 or 10 minutes
look to see if they are done. that means, a little brown, not burnt.

Before or after roasting, you can grind some fresh pepper on the sprouts. you can also brighten the flavor with a squeeze of lemon juice (that’s about 1 tsp).

Posted in Recipes and tagged cruciferous, greens. Bookmark the permalink.