J. and I have started the two-week Maffetone test. At least I did. She was on a retreat. Something about converting negativity into wellness. A little bike ride will do that for me. I spent the morning busting clutter and making food for the week.  But my prep is a TOTAL FAIL since I have two boy-children who eat.  Saying they eat is redundant. As in, unnecessary.  I bought 30 eggs yesterday. I hard-boiled 15 over the last two days. They’re nearly gone.  Another four went into fruit smoothies with an avocado. Another two into pancakes (don’t nag me about what I feed my children). Another six went into the omelet I made.  And two went on top of the dog kibble. (Don’t nag about the dog either).   The boys ate the peppers and cucumbers I bought yesterday. So I bought more.

My friend Riot Act is paleo-challenge prepared. Cheer her on. But don’t tell her I sent you. She does not want your pity. And doesn’t need any support. So there.

Skip the rest – It’s boring public accountability. And no,  I didn’t photograph all of it. Just the salad. 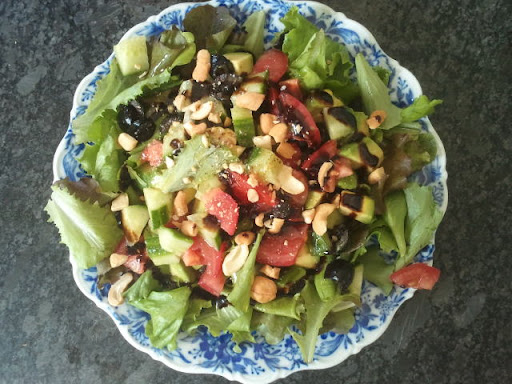 Breakfast: omelet with leftover veg from last night  (carrots, cauliflower & broccoli) pureed and sauteed in some butter with some chopped onions.

Lunch: big salad with avocado, cashews, chopped tomatoes, cucumber. Some olive oil and balsamic vinegar.  (see above).  Some deviled eggs with sardines (recipe on this blog).  Some boiled shrimp and gazpacho soup.

Dinner: tomato sauce, shredded zucchini and some carrots and onions, black olives, pressure cooked with one of the turkey thigh bones that still had a lot of meat on it.  I didn’t tell the kids that I hid the vegetables in the sauce.
Training: 80 minute ride in the Dunes.  I blew off the 4-hour brick that the plan called for. Didn’t feel like it. Plus I remembered at 16h that we were out of milk and that the store would close at 18h. Dumb laws.
Cheat: about 200 ml milk in espresso (morning and afternoon). I woke feeling like I had been run down by a lorry (that’s a truck, I think).
I am not going to weigh myself or count calories for two weeks. Which means I will be a blimp by next week.   To guard against this eventuality,  I will ask myself before eating, am I hungry? What am I hungry for? (Screw the dangling preposition).